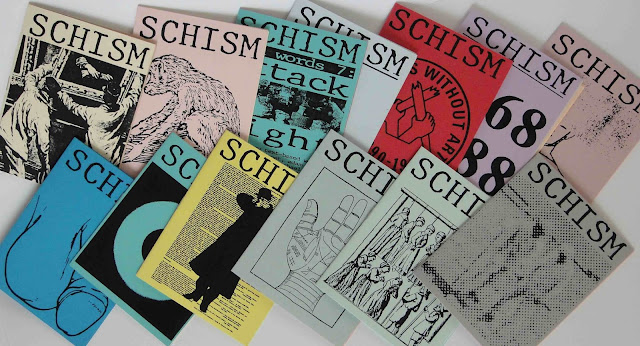 The theoretical and conceptual framework for the fourteen issues of Schism magazine were the outcome of a meeting in the summer of 1985 in London with Stewart Home, the English cultural critic. Home and I had been in communication for a while and it was good to meet with him in person. As we talked Home tried to persuade me, that on my return to San Francisco, I should adopt the name ‘Karen Eliot’ for my artistic activities. He explained that it was part of a larger international project in which multiple artists would adopt the name Karen Eliot for their creative activities, and by doing so we would collectively create this sort of uber-artist who would achieve fame and renown, in which we could all then bask. A little later Home would develop the Smile magazine project in which all these Karen Eliots would publish their own magazines called Smile. Thus, began my participation in the multiple-name project and the Neoist Cultural Conspiracy.1

Home's ‘Karen Eliot’ was his own counter-name to Istvan Kantor and his Monty Cantsin multiple name project that he started in Canada (arguably the ‘original’ multiple name).  Home was a rival to Kantor, but assorted Monty Cantsin's also joined in with the Karen Eliots in the Smile magazine project.

Intrigued by these ideas and not wanting to follow the pack, or relinquish my individuality, I decided to adopt another name that would be a sort of counter-Karen Eliot but would still fall within the spirit of the project. I came up with the name Janet Janet.  Since I was into photocopy zines at the time, it seemed natural that her voice piece would be a zine, and it was called Schism. The name was also an oblique reference to a statement that Home had made about ‘splits and schisms’ after his acrimonious split in 1985 with the Neoist Cultural Conspiracy, plus the word sounded just a little bit like Smile.2 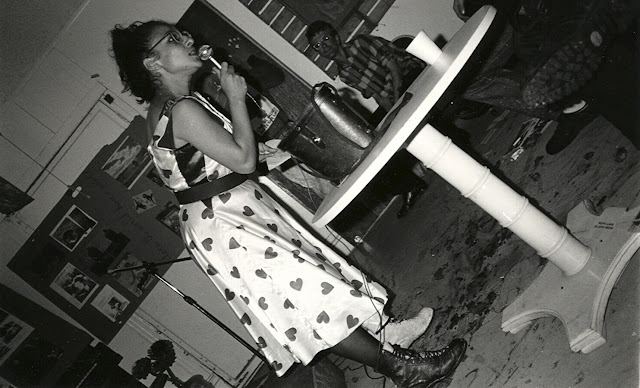 Originally Janet Janet produced only her xerox magazine which were typically eight-page pocket-sized publications that addressed things that were on her mind — politics, the art strike, abortion, plagiarism, drug tests, Chernobyl, and one was dedicated to her 30-day mail marriage to the artist Norman Conquest (what a gentleman!).  After a while she gained a certain local notoriety and people began to ask her to give poetry readings and performances in San Francisco’s alternative art scene.  Not wanting to reveal the ‘true’ identity of Janet Janet, I asked various female and male friends to assume her identity for the period of the reading or performance.  This worked extremely well, and there were a total of about 4 people who assumed her identity at different times.  The woman who was the first Janet Janet, Arda Ishkhanian would later become my wife.  Clive Philpott, the librarian at the Museum of Modern Art in New York was really hot for Janet Janet, and that’s how the museum came to acquire a complete set of her Schisms.

Schism magazine and Janet Janet’s career ended with her participation at the beginning of 1990 in the Art Strike 1990-1993, and her ceasing of all her cultural activities in order to starve the art world of products and thus bring the whole disgusting edifice to its knees.  Despite the art strike’s certain failure — at least she tried, many were too scared to give up their identities as artists and become real people again! 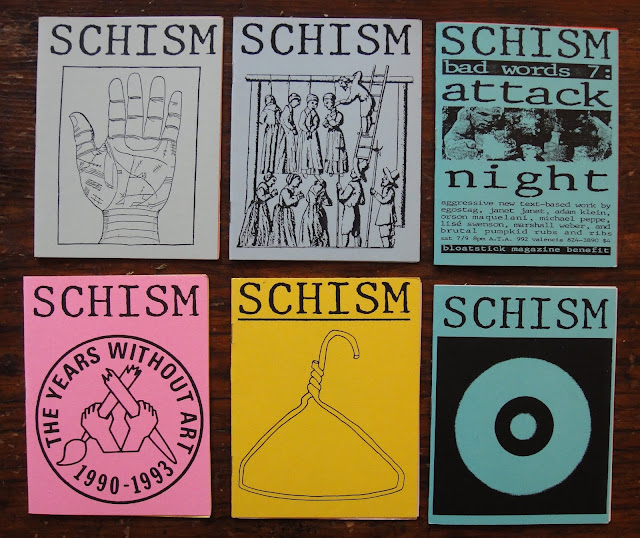 #11, 1985  Since Janet Janet's name was a 'double' it was obvious she could not start her magazine with #1, but #11! This issue's various pages respond in different ways to some of Home's writings as well as the center pages announcing another of his projects the "Art Strike 1990-1993."  The statement on the back cover was a modified and plagiarized text of Home's that read, "Schism was never intended to be a serious art movement, it was a rather slight joke. A humorus (sic) way of exposing the stupidity of organised art movements."  Plagiarism was another of Home's projects in which plagiarism was utilised as a positive technique in order to question ideas about artistic identity and the concept of originality.  Late in the 1980's different mail artists took up the call and organized a number of Festivals of Plagiarism.  I initiated one in San Francisco in 1988, in which Janet Janet was also involved.

#12, 1986
"...firm as a monkey's tail...", this text is from an old Creole saying that was used by President of Haiti, Jean-Claude Duvalier ("Baby Doc") in a 1986 radio broadcast to reassure the country that he remained in power in the face of a popular uprising.  Not long after this he fled the country. Juxtaposed with this quote is an image of the Space Shuttle Challenger that exploded soon after take-off on January 28, 1986 claiming the lives of the seven-crew members. This issue suggests that even though we are often confident that things seem to be stable and secure — things can change very quickly! 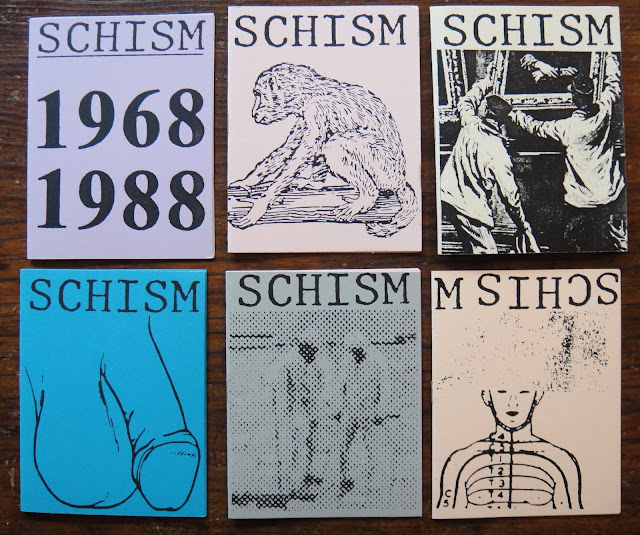 #13, 1986
The background images are from newspaper coverage of the Chernobyl nuclear plant disaster (April 26, 1986). The text is related to Janet Janet's 30-day mail with the mail artist Norman Conquest. At the time of Conquest's marriage to Janet Janet he was living in Los Angeles and I only recently discovered while there had created a mail art piece which led to him being charged by the FBI for defacing US currency. For further information about Norman Conquest (real name Derek Pell) see: Derek Pell - Wikipedia

#14, nd
"Drug tests: the loyalty oath for the new inquisition," in the USA drug testing began to be used in the workplace and it aroused lots of controversy and now it's standard in many jobs.  Cover image of 'witches' being hanged.

#15, nd
George H. W. Bush was Ronald Reagan's Vice President.  "Beating about the bush," is a phrase that means the person is not being honest or avoiding something.  Janet Janet hated both these men.

#18, nd
"Signs of life or a life of signs," my favorite, with images from the medical procedure for a vasectomy. 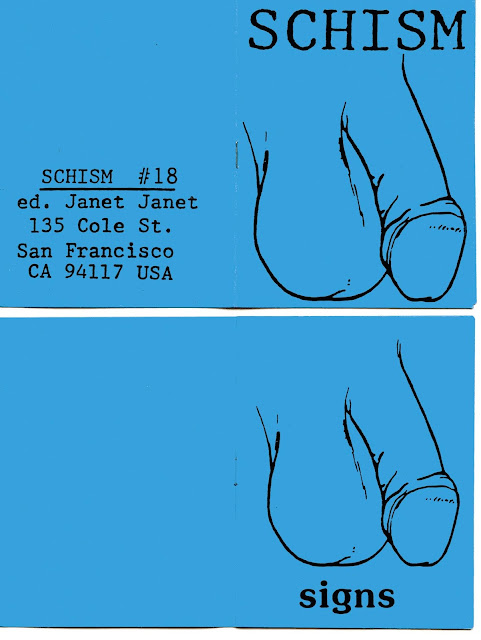 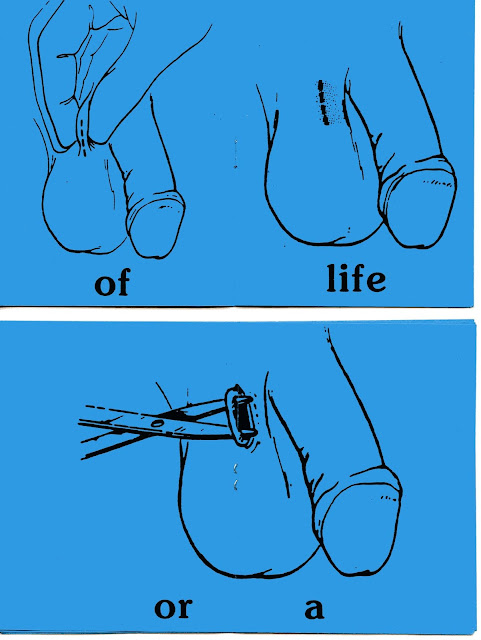 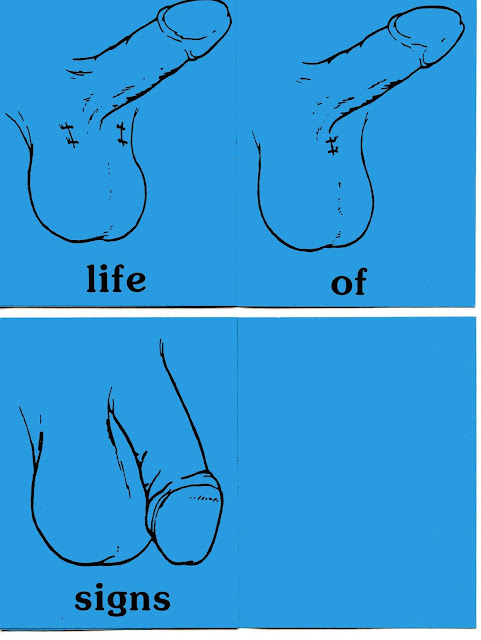 #19 & #20, nd
Arda Ishkhanian who was the first person to perform as Janet Janet reversed the text in Schism #19 from: under every woman's curve lies a muscle to under every man's muscle lies a curve, as well as rearranging the magazine's name as well. I can't remember where the original saying came from, it could have been mine. I really like the complementarity of these two issues. 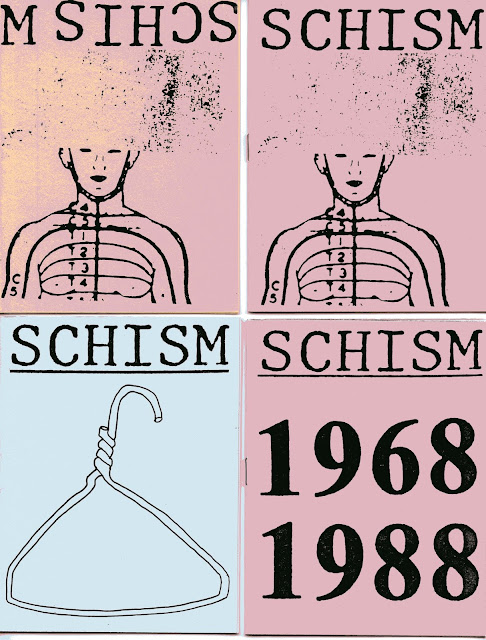 #22, 1988
An anti-abortion issue with drawing by Janet Janet.  The anti-abortion movement in USA has become much more powerful since 1988. 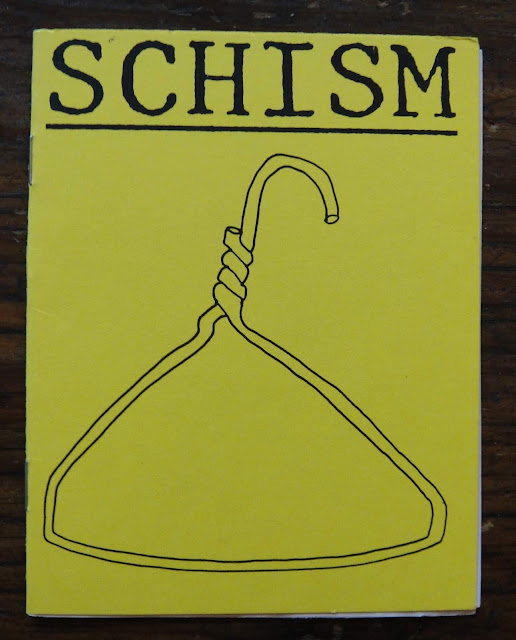 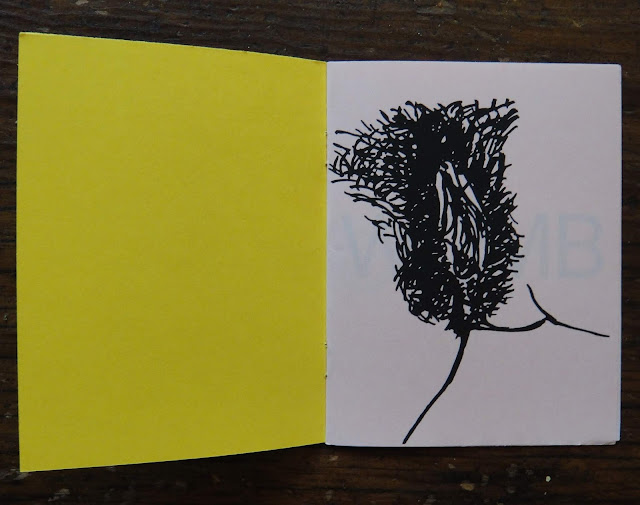 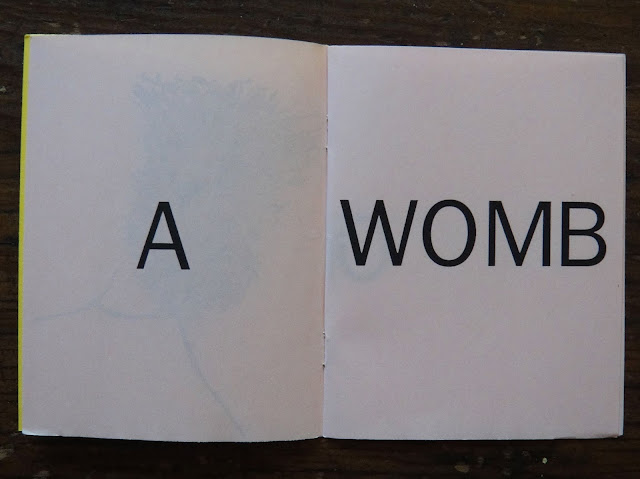 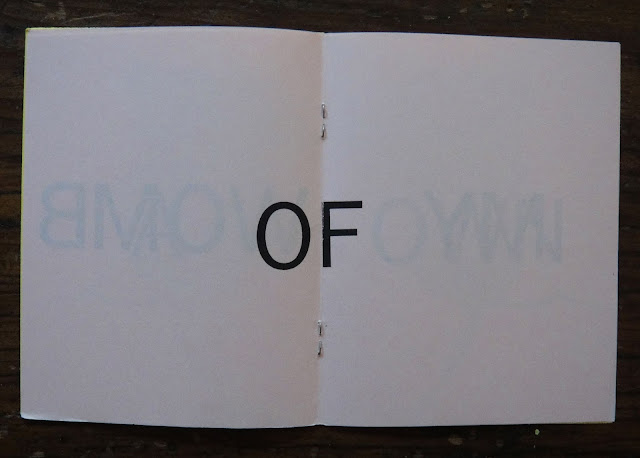 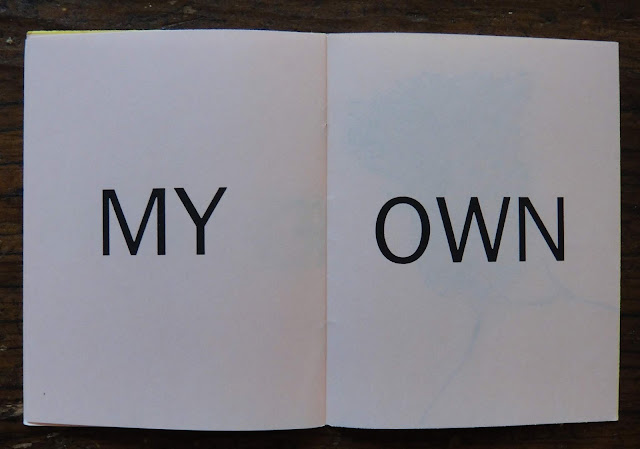 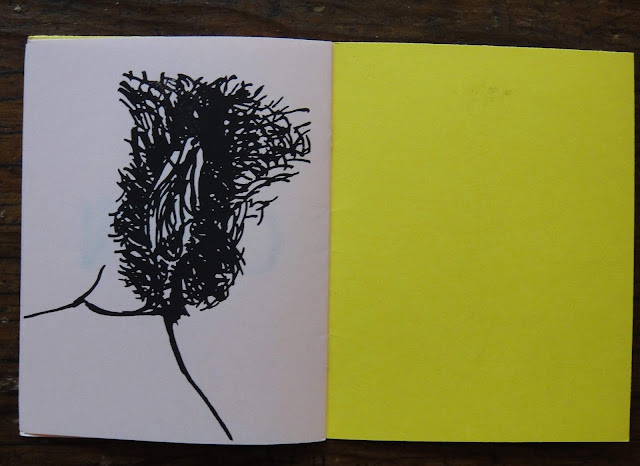 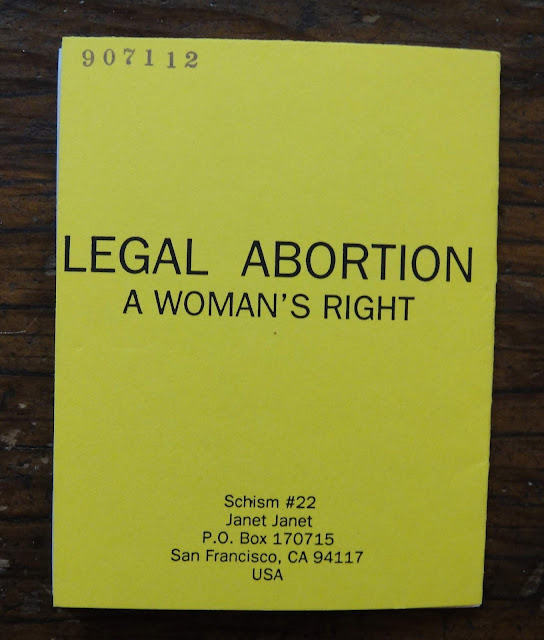 #23, 1989
An issue that lists Janet Janet's publications, exhibitions, and readings.  Includes photographs of the 3 Janet Janet's who performed live at various events in San Francisco (Arda Ishkhanian, Nathan Yrizarry, April Jones). Back cover includes a quote from the cool Canadian comix artist Julie Doucet on the influence of Janet Janet at the beginning of her career.  Janet and Julie corresponded for a year or so soon after Janet Janet started Schism, and this inspired Julie to start her own magazine, Dirty Plotte. 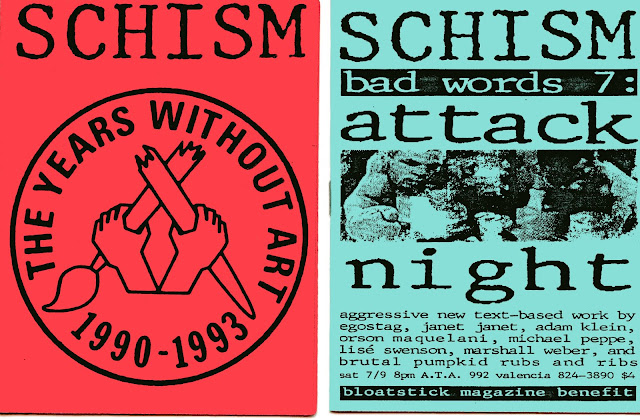 left to right: #24, #23
#24, 1989
The final issue before Janet Janet joined the Art Strike: 1990-1993.  The art strike form reproduced on each page was sent to Janet Janet by Andre Tisma (former Yugoslavia).  This issue was published to coincide with the Art Strike activities and events at ATA art space in San Francisco during 1989 leading up to the beginning of the strike on Jan. 1, 1990.  Copies of this were included in the Art Strike time capsule that was buried in the basement of ATA, and later dug up in 2010 on the 25th anniversary of the founding of ATA.

1.         Smile magazine's history is inextricably linked to the international Neoist Cultural Conspiracy and  Stewart Home. First published in 1984, Smile was originally the organ of Home's one-person movement, the Generation Positive. By the third issue (later that same year), Home had come into contact with the Canadian-based Neoist movement, and recognizing that both were virtually identical, adopted the term 'Neoism' for his activities. Home would continue publishing Smile until the eleventh issue in 1989, just before he commenced participation in the Art Strike 1990-1993, and ceased all cultural production for three years. Further information about Smile magazine is available on this blog.