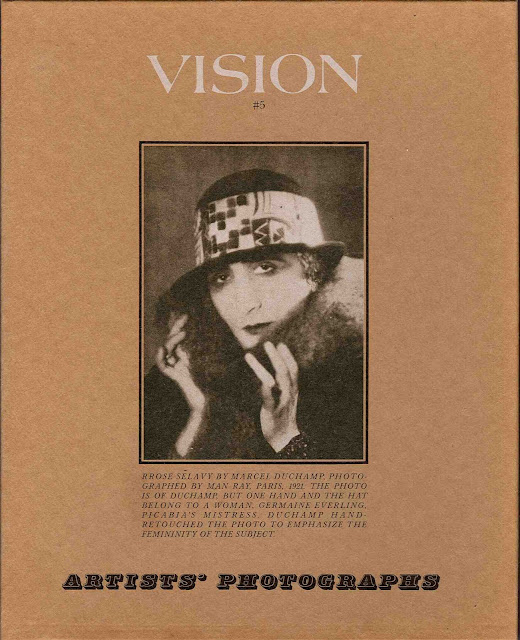 Titled “Artists’ Photographs,” this final issue of Vision (1975-82) brought to a close an important artists’ periodical that was edited by the San Francisco-based conceptual artist Tom Marioni. Committed to presenting the work of conceptual artists, Vision was conceived as being one part of the programming in Marioni’s larger conceptual art project—the Museum of Conceptual Art (MOCA, 1975-84).

The format of this issue is an 8”x10” box containing 62 photographic reproductions printed individually on unbound pages. Marioni provides an introductory essay on his rationale for asking these conceptual artists “to send me a photograph not of an artwork but as an artwork,” as well as brief biographical information on these now, well-known artists. This last Vision serves a number of interesting roles, and illustrates how editors of this period sought to expand the parameters of the traditional magazine format by experimenting with new editorial models. Firstly, this issue serves as a catalogue for an exhibition of conceptual artists’ photographs that Marioni curated for the Crown Point Press Gallery in 1981. Secondly, in presenting a periodical as a box of unbound pages, he was referencing not only Duchamp, but also a number of other experimental artists’ periodicals from the previous two decades (Aspen, Fluxus, SMS). And finally, the periodical functions as a potential exhibition, indeed, it was exhibited in a number of university art galleries during this period. Back issues are still available for $50. 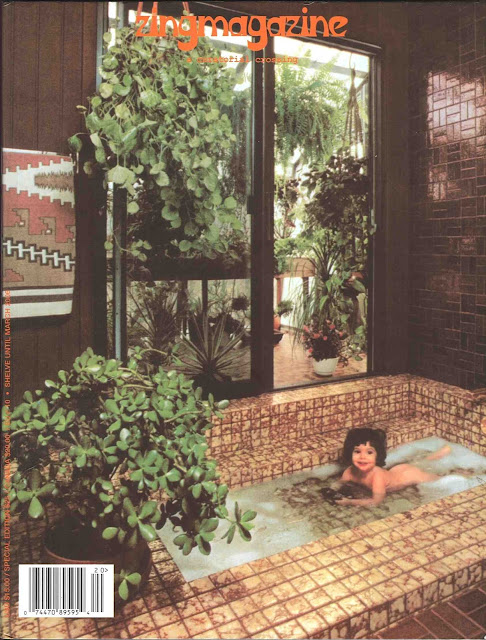 Weighing in at 2.5 lbs., 254 pages, and 3 inserts; a poster, CD and postcard, this latest issue of zingmagazine offers up an eclectic smorgasbord of artworks, projects, photographs and texts. Founded in New York in 1995 by Devon Dikeou, zingmagazine was created in order to serve as a link between the creative efforts of different individuals & groups working in a variety of media & disciplines. zingmagazine was envisaged as a site, or crossing point, through which collaborative exchanges could take place that would counter the isolation so often found between disciplines. In order to create a structure for this concept Dikeou adopted a curatorial model for the periodical, and each issue is built around the projects submitted by a rotating group of invited ‘curators,’ in what the magazine’s masthead calls “a curatorial crossing.” This issue contains works gathered by 14 curators, as well as an additional section that includes a mix of reviews, texts and interviews. The ‘zing’ in zingmagazine springs directly from its adoption of a publishing model from outside of the world of magazines. 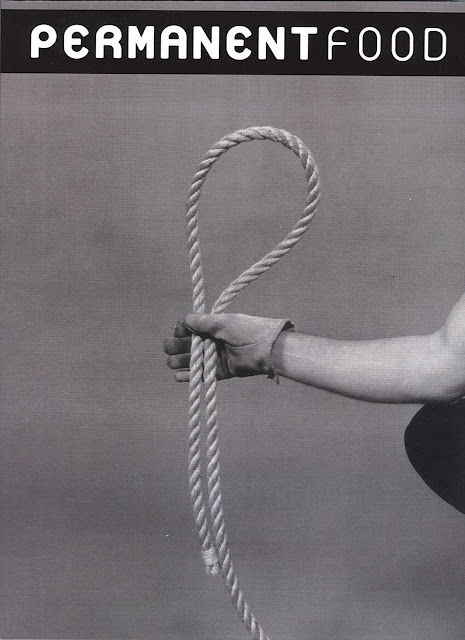 A radically different approach to artists’ periodicals is represented by Permanent Food. Initiated in 1995 by the Italian neo-conceptual artist Maurizio Cattelan in collaboration with Dominique Gonzales-Foerster, Permanent Food’s editorial model turns all the traditional approaches on their heads. Permanent Food is dependent on submissions of visual images, from a wide variety of contributors in the form of previously published magazine pages pilfered from a plethora of different contexts. About the periodical, Cattelan states, “from the very beginning we wanted Permanent Food to be a second generation magazine, something that grows by taking what’s already there. And I also wanted to have a magazine without personality. So the more personalities were involved, the less the magazine would have looked like the product of a single person.” The results of this appropriationist recycling model can be seen in this 194 page issue, and it’s a hilarious, weird, jarring, oddball and ultimately wonderful cornucopia of images culled from our collective image bank—all reshuffled together in this printed matter mosh pit.

Note: These texts were originally published in the College Art Association (CAA) News in a column titled The Bookshelf, November, 2006.