Bill Gaglione: I think so...

SP: You adopted the assembling technique because it was the best way of working...

BG: I had just got back from Europe and I was in Eastern countries and I saw what was going on, they were doing those type of magazines, I was aware of that, but I saw a lot of it, and I said wow! Again it was the money factor, who had to money to publish? So it was a nice way to put a publication together.

SP: So you connect assemblings with the former Eastern bloc countries?

BG: Most of the publications that I saw there were assembling type publications, so I was really influenced by that. In 1970 we toured Eastern Europe.

BG: Off hand I can't remember, they were so obscure. Pawel Petasz type magazines or rubber stamp magazines. Galantai in Budapest, he showed me a lot of stuff. Again when I got back I said I wanted to do an issue of Vile, but I don't want to go through the hassle of getting the grant, actually Anna did most of that. And I wanted to do color and it was strictly rubber stamps and it was a weird size. I got to give credit 'cause I had to cut each page 300 times and then stamp it 300 times. It's a really nice issue, it's thick, it's huge, I think 185 artists sent pages. Another aspect of assemblings was that I liked the collating, because I used to call all my friends and it's a nice social way to get together, instead of just sitting there drinking and getting stoned, which we did, but we worked and it was fun. Especially that one, it took us all day, I had about 50 people. My friend was a teacher at a school and we laid these tables out and we walked around and we had food and drink, it was really fun. So that aspect was really nice also, plus it's inexpensive, because basically you design the cover and your course is basically putting it together and mailing it out, and you have to do that anyway. Plus you can do color, limited edition, also that's another reason why I liked this concept.

SP: In the sense of?

BG: That it's limited. Once it goes, it goes. Also, whoever contributed got a free issue that was a nice way of distributing that book. 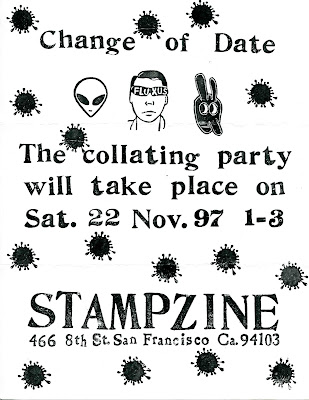 SP: So had you contributed to assemblings before?

BG: Oh yea, Kostelanetz, a lot of stuff in Europe, all through my sort of quote "mail art career." I've liked them the best 'cause I always used rubber stamps, it's a real home made feel, real artsy fartsy.

I've got to hand it to Kostelanetz 'cause he really did a lot of them. Then I did a magazine called Stamp Art in the '80s. It was the same thing, they were all hand stamped, that was my only requirement, I told people you can do anything you want but each page has to be hand stamped at least once, and the rest you could do anything you want.

Now you might find the cover interesting [picking up a copy of Stamp Art]. This is the first four color stamp ever made, and it was basically a photograph and we got the separations made our of rubber instead of... So we did five issues there, Vile and then they called us stamp art. Eventually I will mail you a copy. So that's the only two assembling-type magazines that I did and I'm thinking about doing another in the '90s. I'm helping a woman called Patricia to do one now, she's doing an assembling-type where you mail in 50 copies, so I have been involved with that.
on July 20, 2012
Email ThisBlogThis!Share to TwitterShare to FacebookShare to Pinterest
Labels: assembling, Box of Water, Schism, stamp art, Stampzine
Newer Post Older Post Home