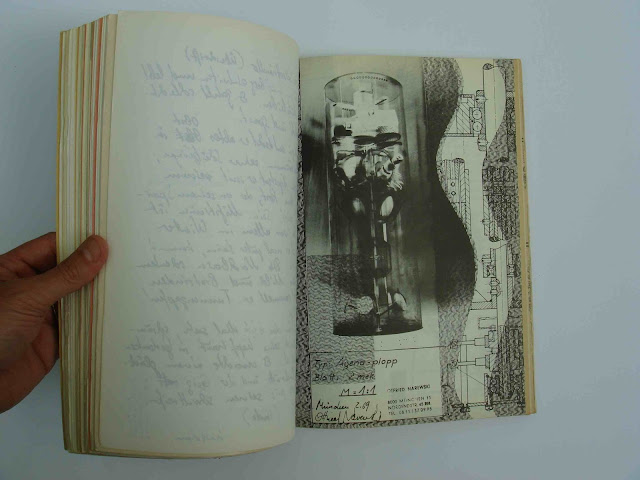 The front and back covers reproduce a number of particularly grisly photographs from the aftermath of a collision between a bus and a train. The dark humor contained within this visual play on the periodical’s title is suggestive of the iconoclastic attitude that informed the editor’s choice of this publishing strategy. This theme is further expanded in Christian D’Orville’s editorial in the frontispiece, in which he speculates upon the experimental, and unpredictable nature of the publishing model that they had set in motion:

My interest in OMNIBUS NEWS shows itself first in my curiosity to discover what could develop out of the possibility of such a sheet-compilation. The heterogeneous and the accidental, the important and the unimportant.  Moreover I am interested in knowing whether there is the formation of a common tone, of generalities and connections, or whether it might be silly to even ask this...One thing is for sure: the experimental aspect of OMNIBUS NEWS should through the conscious elimination of conventional values and elimination of thematic directions, find a place within the opposition to the official art world. (1)

Contributors were asked to donate 15 DM to help with the binding & postage and for this they would receive 10 copies of the periodical, and thus they also became the distributors of the periodical. The editors also hoped to distribute the remaining copies in a variety of unconventional locations such as the libraries of military barracks and old people’s homes.

In the editors call for works D’Orville speculates on the extent to which this democratized publishing model might encourage others (artists and non-artists), to step up for a ride on this new periodical omnibus.

Does the unofficial and non-commercial distribution lead to a manifold reaction and thus to a readiness to participate, which will make possible a second edition with a similar but also very new and dynamic tension? It is exactly the expansion to people who up to this point did not want or could not participate, which awakens my interest. Everybody can be their own editor. No general achievement-expectation thus should keep the individual from experimenting. The publishers are only the compilers and organizers of OMNIBUS NEWS. (2)

Omnibus News contains a wide assortment of visual works, literary & theoretical texts, proposals & documentation, and reproductions of extant works created in a variety of media. At the end of the periodical is a three page listing of the contributor’s names and addresses.A survey of the contributor’s list reveals submissions from eight countries, with an 82% majority from Germany.(3) For reasons that remain obscure the editor’s would not repeat this publishing experiment and periodicity itself would be another convention that they discarded.(4)  However, Omnibus News remains a landmark publication in establishing a new genre of periodical publishing that would come to be known as “assembling” periodicals. Assemblings embrace a radical new editorial model in which the traditional authority of the editor is overthrown, and s/he now becomes an ‘assembler/compiler’ in an open and uncensored publication process.

Although this type of editorial model had been used before, it was always within the context of smaller and intimate friendship networks. Omnibus News was a significant break in this tradition as it opened itself up to a much larger international network of potential contributors. The year 1969 also represents a watershed moment in which assembling periodicals would appear in other countries, in particular Canada and the United States. Indeed, the name “assembling” comes from a well-known American example appropriately titled Assembling that published 12 issues between 1970-1986. (5)

Omnibus News remains an historical pioneer in establishing this democratized model as an alternative to traditional periodical formats and assemblings continue to be published up to the present day.