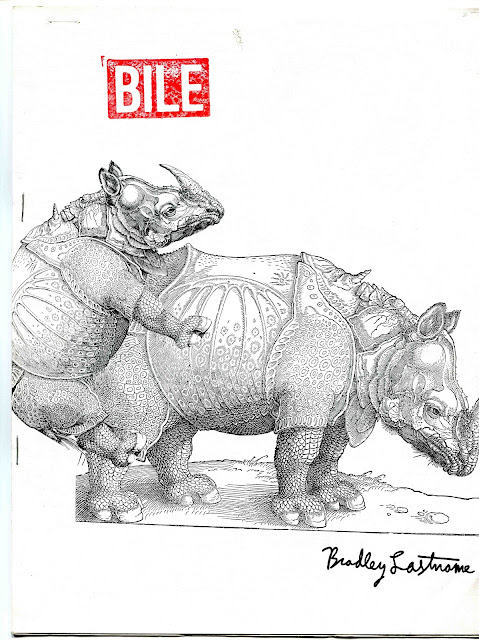 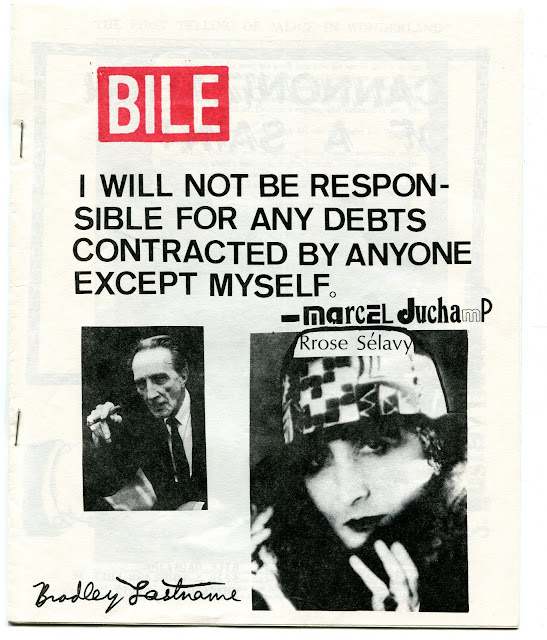 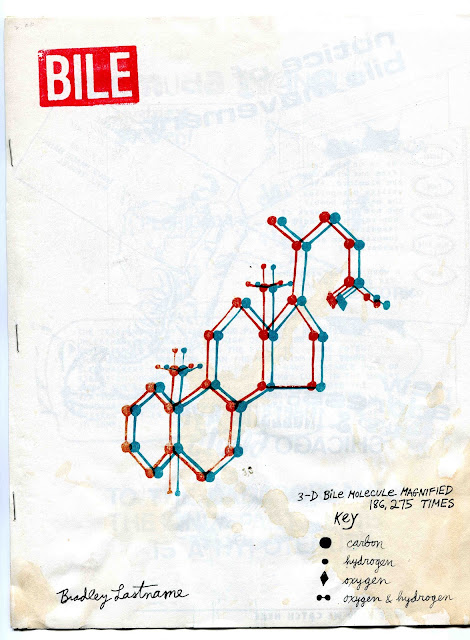 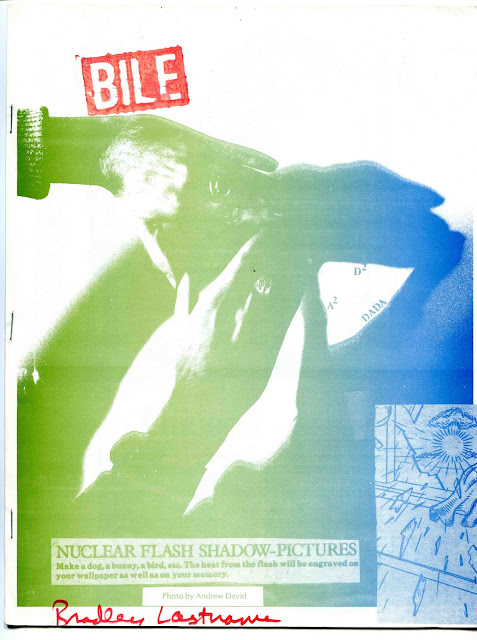 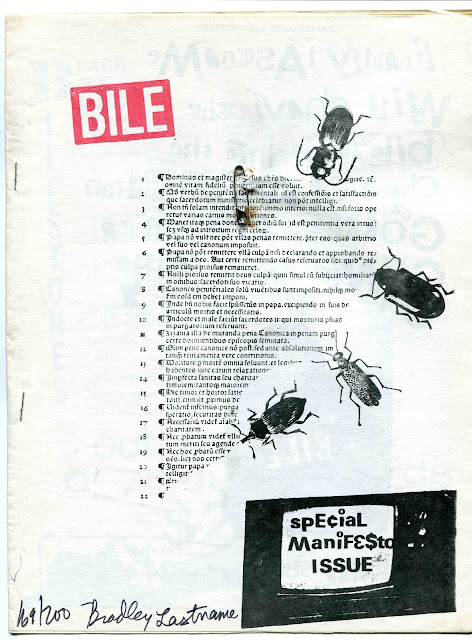 Stephen Perkins: Can you tell me about your background and how you came to start publishing Bile?
Bradley Lastname: I am mainly a painter and collage artist, my work is in private and institutional collections on 3 continents. My primary dealer was the Grayson Gallery in Chicago where I had one 1-man show and was in numerous group shows. Gael Grayson died last year of cancer and I am currently seeking other representation. Bile arose in 1978. I knew General Idea in Toronto (File magazine) and Bill Gaglione and Anna Banana in Frisco (Vile magazine), so I started Bile with the same red logo as the original LIFE magazine that we all were parodying their logo. We were at Inter-Dada 1980 in Ukiah, the huge international thingee where the late Cavellini was the supreme guest of honor. Bile ran for 25 issues until 1984, when I started up The Press of the Third Mind, which mainly publishes poetry, fiction, and theater, to date we have done 17 books, all perfect bound and distributed by major indy distributors. Authors include Tom Vaultonberg, Patrick Porter, Robert Pomerhn, Jorn Barger, etc...
SP: How did you get connected to the mail art network?

BL: When I lived in Buffalo, I got connected to the mail art network thru Greg Puchalski, who published 491 magazine (about 30 issues total over a period of about 15 years). Greg ultimately moved to Pittsburgh, where he is an artist and industrial musician who heads up the group Powder French. I was also spending a lot of time in Toronto, where General Idea was publishing File and running an art distribution system called Art Metropole. You really should contact Greg about 491 dadazine if you haven't already.

SP: What inspired you to take up the cudgel and start publishing Bile, and thereby create the troika of File, Vile & Bile? From the issues that I have it also appears that most of the contributions were your works, so was Bile essentially a one-man campaign of biliousness aimed at attacking everything a magazine like Life magazine stood for, or did you have another agenda?

BL: There were over a hundred people who had illustrations/text in Bile, including Steve Spera, Dave Seman, Barry Spiro, Leavenworth Jackson, Dexter Hodge (Jeff Twiss), John Cederberg, Mike Kaspar, Kevin Riordan, Fernando Pessoa, I could go on forever. If you want, I can give you a solid mailing address to write to Greg in Pittsburg, and he will send you a free parcel of 491 dadazines, as long as you promise to write about them.

Bile is only about 2% of my art output — I have done thousands of paintings, drawings, etchings, lithographs, readymades, collages...that are in collections around the world.

SP: I stand corrected! Even though Bile was such a small part of your output, it seems that it was through Bile that you established a presence in the network, so from that point of view I consider it important. The other reason why I'm interested in it is that there is so little information in the various publications on correspondence art about Bile. So I'm interested in getting at what you were trying to do with it, what you got out of it, how it fit in with your other artistic activities and whether it was successful in what you wanted to do and the reasons for why you stopped doing it. Either way to have published so many issues over a 6-year period is quite an accomplishment. Other things I'd like to know is how many you printed each time, how you distributed it, and whether you were sending it out internationally. I assume you also traded Bile and therefore must have been in contact with an extensive network of other publishers.

BL: I printed 200, it went to USA, Canada, Mexico, Europe, Asia, etc... It was distributed by Printed Matter on Lispenard street, the New Art Alliance (or something like that), Associated Art Publishers (or something like that), these are mostly defunct, although Printed Matter is bigger than ever. It gets mentioned in various books and anthologies. There was an art publisher in Paris who wanted to put out all the issues chronologically in hardback and I sent him everything, but never heard from him again. I assume he got the package; it was sent airmail and cost a fucking fortune!

SP: Was Bile intended to be a humoralist's corrective to art and the art world or as you suggest in the "Special Manifesto Issue," like a sublime hand grenade exploding in all directions at once and leaving everything transformed in its wake?
BL: I was trying to write in the style of a surrealist manifesto, but my aesthetic vocabulary was too limited at the time, and I was too young and inexperienced to properly pull it off. I could write a much better one today 30 years later, if I felt like it. There was a dadazine in London being put out by Jim Holiday called The Agent, and they wrote me this inflammatory letter hoping to piss me off, saying things like "no bile needs a number, numbers are what coroners assign to your teeth," and re-naming "Maldoror" as "malodor," saying that Ducasse (Lautreamont) had halitosis. But all I did was write them back thanking them for the bodacious mail art. (They recounted the entire escapade in a future issue of The Agent).

SP: I think it works quite well as a Surrealist manifesto, no doubt the Brits were just trying to mess with you in order to generate some text for their magazine. The more I look at issues of Bile the less it seems like a 'dadazine' and more like a 'surrealzine.'

In the "Official 50-ft. Junior Target" issue there's a very interesting diagram titled "Bile: Centre of World Conspiracy?," with Bile right at the bottom holding up all these assorted groups, movements and various individuals, and Vile and File being the most closely related. The text that accompanies this map spins Bile as the product of some kind of JFK-like assassination conspiracy theory — and I definitely sense a kind of conspiratorial feel that is a common link to all the issues I possess. Would it be correct to say that at the heart of the Bile project there lay some secret conspiracy that is never actually revealed? 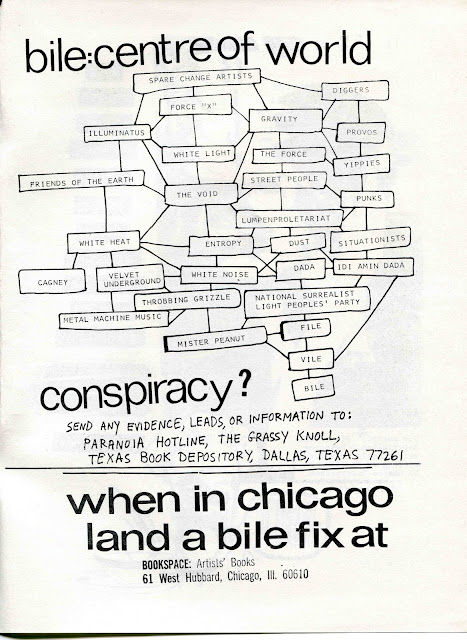 BL: The conspiracy flowchart is plagiarized from this underground comic called Cover-up Lowdown, all I did was add "File, Bile, Vile" to the bottom of it. The issue came complete with a foldable mobius strip which I remember assembling. Whenever I run across the words File, Vile and Bile in any novel I read, I circle them on the pages they appear, then glue the 3 pages side by side and triangulate it into a dadagorean triangle, then I mat and frame it.  I have about 35 of these so far, and if U ever come 2 visit me in chi-town, I will give you a couple to take home with you 4 free!

BL: Bile doesn't live on, but these are framed nostalgia pieces, and if U are ever in chi-town, come down 4 a visit and I will give you a few 2 take back to Wisconsin.

SP: Why did you stop publishing Bile, and do you consider to have been a success (however one might measure that!)?

BL: The year I ceased Bile, I started up the Pre$$ of the Third Mind, which publishes fiction, poetry, plays, anthologies by me and other people. So far we have done a couple of dozen books, varying in length from 50 pages to 250 pages. Authors include Tom Vaultonberg, Robert Pomerhn, Patrick Porter, and so on, and so on. I would consider it a success.
SP: What do you think was the most significant achievement of Bile?

BL: I like to think of it as a domino that hits other dominoes, and causes more dada.